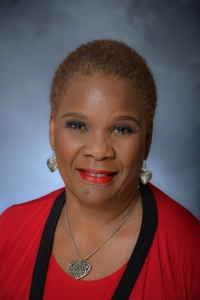 Brenda Jackson, New York Times and USA Today Bestselling author of over 140 books and novellas, and 15 million books in print, earned a Bachelor of Science degree in Business Administration from Jacksonville University.  She worked in management for State Farm Insurance where she retired after thirty-seven years.  Forty-nine years ago, she married her high school sweetheart, Gerald and they have two sons, Gerald Jr. and Brandon, ages forty-three and forty-one, respectively.  She is a member of Delta Sigma Theta Sorority, Inc.

Her professional writing career began in 1995 with the release of her first book, Tonight and Forever. Since then, she has received numerous national and literary awards and has made many trail-blazing accomplishments, which includes being the first African-American author to make the New York Times Bestseller’s List and the USA Today’s Bestseller’s List in the romance genre.  She was a 2012 NAACP Image Award Nominee for Outstanding Literary Fiction for her book, A Silken Thread; and she was named Romance Writers of America’s Nora Robert’s Lifetime Achievement Award recipient for 2012. For a list of additional awards and recognitions, please see link below.

With the belief that if you aren’t invited to the table, then you create your own table, Brenda Jackson has partnered with Hollywood’s film writer Bobby Smith Jr. (Jason’s Lyric fame) to launch a film and television company to develop and produce titles from Jackson’s collection of over 140 romance novels. The pair are excited to bring Black love stories by Brenda, as well as by other romance authors, to life on the screen. Three of Brenda’s books have already been made into movies, with two others scheduled to film in 2021.

In 2013 Brenda was recognized by her mayor with the Jacksonville Trailblazer Award.  In 2014 she received the Sallye B. Mathis Community Service Award from the NAACP; and the Bethune Cookman University Award 2014 for Community Service. In 2015, she received the Humanitarian Award from Florida Memorial University.  Additionally in 2015, 2016 and 2017, Brenda was honored by the Southeast Small Business Magazine as one of Jacksonville’s Top 30 Women of Influence; as well as the National Medical Association of Women Physicians.

She has been featured in several magazines including Essence, Sister-2-Sister, Today’s Black Woman, Ebony, Romantic Times, Good Housekeeping, Woman’s Day and Cosmopolitan. Brenda novels, One Special Moment and Truly Everlasting, have been made into movies by BET and Five Alive Films, respectively. Passionflix produced A Brother’s Honor from the Granger Series that is presently streaming.  Brenda has started work on another movie based on her book, A Silken Thread, with Debbie Allen directing.

A staunch supporter of higher education, Brenda established the Josiephine Threatt Scholarship Foundation at Florida Memorial University, in honor of her grandmother to grant college educations to students who might not be able to afford one.

Brenda created the “Brenda Jackson Empowerment Scholarship” for a graduating senior at the Pace Center for Girls.

BRENDA JACKSON is a free app on your smart phone.

For a list of Brenda’s awards, recognitions and other accomplishments,

If you would like to receive my monthly newsletter,

Thanks to Kenny Rogers, who starred in my movie, Truly Everlasting, and Laurie Kahn of the Popular Romance Project for the touching video tributes to my husband, Gerald Jackson, Sr. who passed away on December 15, 2013.

This is a special day for me. It all started on a beautiful summer evening. Tuesday, July 11, 1967. I was 14 and visiting my grandmother. This particular 16-year old boy who lived in her neighborhood had walked me to and from the neighborhood store a few times that summer, and I thought he was cute and I liked him. On this particular evening he was on his bicycle and offered me a ride, so I jumped on the hambars and off we went. Right before we reached our destination he stopped the bike and asked if I would be his girlfriend. And I said yes! The rest is history. I recorded that night in my diary as “the best day of my life.” I kept that diary for 5 years and ended it on my wedding day, July 8, 1972, 5 years later. Thanks Gerald Jackson Sr. for asking me to be your girl! It’s been 46 years and I am still yours!

Where love, passion and promise awaits you between the covers of every book we publish. Click below to visit the site!